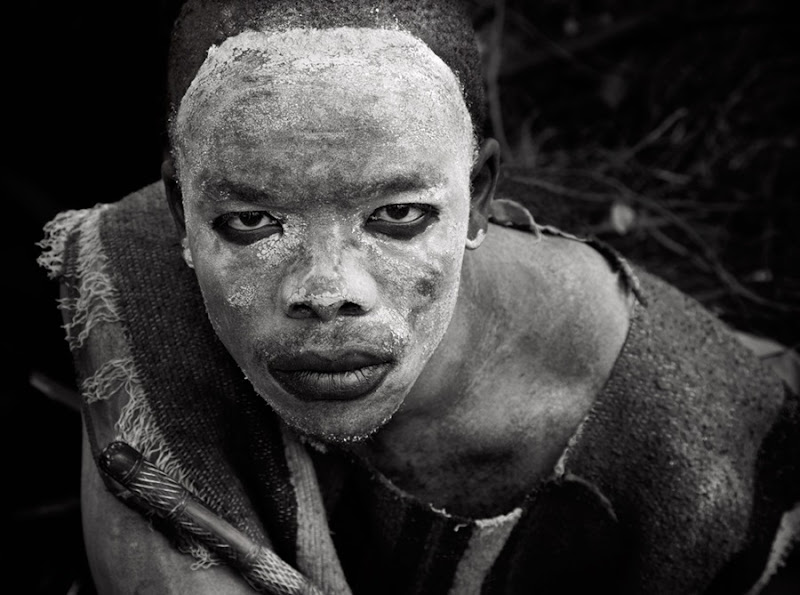 Vincent the Umkhwetha: The Making of a Man © Andre du Plessis

Making of a man..
Umkhwetha, a Xhosa initiate into manhood..
When winter makes its first hint of arrival at the Cape, then Xhosa boys prepare themselves to become men.
They prepare to become bakhwetha, initiates who undergo a series of trials in the wilderness of the Eastern Cape (or, in Cape Town, on plots of land that border the N2 highway) - trials that culminate in circumcision.
Come June, with winter at its coldest and wettest, the stories start to appear in the newspapers: the stories that tell of boys who didn't make it into manhood. Instead, they died, or were mutilated, because their operations were botched. We saw the stories last year and will again this year. However, the option of staying uncircumcised is impractical if you live among Xhosas.
Even in his book Long Walk To Freedom Nelson Mandela comments on how a Xhosa man who has not been circumcised is a paradox, because he is still viewed as a boy.  Eastern Cape, South Africa.

You may find more photos of this ritual on the above site. They are more graphic in detail.

Andre du Plessis hails originally from central South Africa and currently resides in the U.K.  (London) where he works in private practice as a Physician with a unique Anesthesiology Specialty. His great love for photography began when he was a young boy of five, and has remained with him steadily since. The great motivator for his photographic adventures is never knowing where they will lead him.  When asked about the spontaneity of his “Street Shoots”  with regard to his South African series he responded in this way:

“In general, my subjects are people I do not know; in essence they are strangers to me at first. My objective is that the images I take of these people become something that transcends this void, and perhaps bridges any distance between us.  When I look at these photos afterwards, although these people might be strangers, I want the photo to express that I feel a kinship, an understanding, and that respect for one another is tangible.”

Wonderful how you have constructed the story around this image Noelle. My own memory of this image was very special. I was traveling back from Knysna, the next coastal town down the N2, and saw this young man in the bushes as I was approaching Plettenberg Bay. The Mkwetha needs to stay away from all during this fortnight of initiation, so I was a bit hesitant to approach. However, my curiosity and wish to meet him, and photograph him, became the better, and I turned in at the township of Kwanekothule, struck up a conversation with a boy of about 18, and told him that I want to go and meet (and photograph) this man painted white that I saw.
let me say that the Mkwetha is not something unfamiliar to me. They have been part of my life since I can remember. Ever-present in any green fields outside the perimeter of any Eastern Cape city. When I played golf as a teenager, they will emerge from the bush trying to sell golf balls that they picked up. However, if there was a female present, they will not show face, as any contact with females are prohibited during this period of attaining manhood.
This is Vincent. he is 17, from the township of Kwanekothule, and in his final year at high school. he had some fellow Xhosa boys sharing his experience and camping out with him, but when I visited, they had already left. Their transformation was done, and they had re-integrated back into their soceity, albeit as men.
I saw the burnt-out patches of where their lean-to's were - they have to burn everything that sustained them for the two weeks. Shelter, cooking utensils, bedding - everything.
It is also demanded that they are welcomed back into the society with a bang:) Huge party, and the slaughter of some animal, and the words of some elder to proclaim them as wholesome and a man.
What is so special about this for me is that my house is a mere 10 km down the road, where I relax with broadband, can do online shopping, and insist on Balsamic vinegar on my salad leaves.
Yet 10 km before that place that I call my house, I can turn off the road and be transported into something so distant, so honest and so African, and so enriching.
When I spoke to Vincent he was awaiting word back from the college in Knysna where he applied for training as an IT specialist. I have lost contact with him; however, within the next few weeks I shall be traveling down there and I have promised myself that I shall re-establish contact with him, hear how his studies are going, and hand him some prints.
I have his contact details written down, but that little book is not with me now.
Hopefully I shall be able to post again here to tell you how Vincent is, and I shall ask him how he reflects on this Mkwetha time of his.

Posted by Noelle Clearwater at 1:08 PM No comments: